A piece that originally appeared in our Match Programme for the Season, we look back on a famous Monkstown Tour to Trinidad and Tobago (of all places)

It was in the year of 2008, in the lovely month of, eh, May. A few notables from the club had gone to great lengths to organise a once in a lifetime rugby tour to Trinidad & Tobago and it stirred up great levels of excitement among all members of the club, young and old. I was a young 24-year-old, hoping to get my first real experience of touring rugby.

Myself and a few of other players who were just out of college and had the financial capacity of part-time buskers, were sifting through our coppers and picking out the buttons and lint to see if we could afford it. Thanks to some club heroes, who will remain unnamed (but never forgotten), we scraped enough together to count ourselves in. If people ask me why I think Monkstown FC is such a special club, it’s because of people like these.

So, with great enthusiasm and anticipation, a hoard of the Monkstown faithful, comprising players, coaches and alickadoos, headed off for the land of Brian Lara (some cricketer fella apparently – ask the Pembroke lads).

We touched down to a warm welcome from members of the Caribs RFC in the Port of Spain car park, complete with a flatbed jeep brimming with ice cold beer. It set the tone for the tour; warm sun, cold beers, rugby chat and the craic. A good start.

The tour was built around two fixtures; the first against the aforementioned Caribs, the largest club team in Port of Spain, on day three of the tour. This would warm us up for our second encounter and the reason for the tour, a match against the Trinidad & Tobago National side at the end of the week. The rest of the time would be spent training, relaxing and soaking up all that T&T could throw at us. 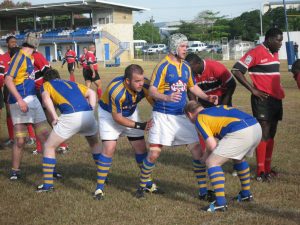 Congregated at Caribs HQ for further beverages and food on night one, we met the humungous Caribs team. They were the leading team in T&T and made up a large proportion of the National team, according to the locals. A daunting prospect for us, although apparently, they didn’t quite feel the same way; one of our lads overheard a Caribs team member brag that they’d easily stick 50 points on us.

That focused our minds on the rugby side of the tour pretty quickly. Playing for the pride of Monkstown is one thing. Playing to soften the cough of some cocky git is another!

We trained and prepped the following day and, cheered on by a well-oiled gaggle of alickadoos, we hammered them 37 – 5. Club Captain Donnacha Casey led the pack in a rough battle up-front, while “Gorgeous” Dave Nolan, Rogsy O’Gara and Dave Kilbride ran riot in the backline, showing the big Caribs lads what a bit of rugby finesse looked like.

Even pension-expert Jono Sheahan played well, I seem to remember, but shipped a couple of hefty knocks, which naturally became heftier as the story grew legs in the last 10 years. The doc ordered him to stick to a staple died of cold, cold beer for the rest of the tour and he duly obliged, being the gallant club man that he is.

But in truth, the Caribs club were amazing hosts. The whole touring party was treated like royalty for the visit. They couldn’t have been more accommodating and even brought us off to a nearby island on a down day, to feast on BBQ chicken, local brew and some rum called Forres Park that could have landed Apollo 11.

The training though. It. Was. Torture. 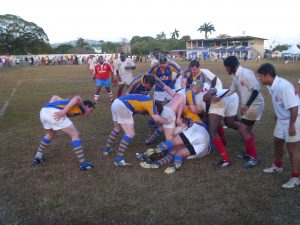 The morning after a particularly eventful night out, in an attempt to sharpen minds ahead of the big match against the Trinidad and Tobago National Team, Dave “the much sounder” Bradshaw tried to sweat it out of us and Cpt. Casey tried to put some shape on us.

In sub-Saharan conditions, it wasn’t long until they achieved their murderous aim. Stopping was the problem and we absolutely bucketed sweat all the way home on the bus until we gladly bailed into the pool back at the hotel. I’ll never know how Briain Colgan survived it; he looked like a large red jelly baby by the end. But, it had the desired effect and we were primed and ready by the next morning, where the forwards set about practicing line-outs by the side of the hotel pool!

The backs were off getting their perms done I’m sure, who cares.

Unfortunately, the element of surprise was no longer on our side when the time came to play the National team. A humbler bunch of Trinidadian monsters arrived to meet us along with a sizeable home support to cheers on their boys.

The match was much more of a slog-fest with neither team willing to bow to the opposition, the heat or the rock-hard pitch. The rugby was not a thing of beauty – except for when Sir Clive Fitzharris nearly got split in two by their backrower, known only as “Beast”. We did, however, manage to eek out a 17-7 win, through pure stubbornness and clever game management from the Hogan Bros and Dave Morris (when he wasn’t smoking cheap local cigs). 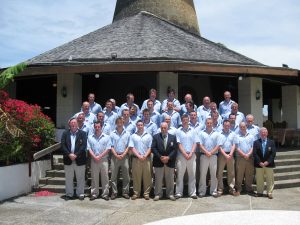 We even made the front page of the Trinidad Guardian the following day; the local paper of record highlighting both the hard-fought encounter and The ‘Town’s unbeaten tour.

The obligatory court session followed. With Casey hogging the limelight as always and Eoin ‘Mingin’ Murphy acting in the role of ‘creative director’, brave souls were broken and rebuilt. A helluva few days of celebrations followed and the tour was rounded off with a bit of much needed R&R in Tobago before heading back to real life in Ireland.

Looking back now, the tour mixed the best parts of what club rugby is all about – getting a group of lads to pull together for each other, while having the craic at every turn. Many a lasting friendship was formed and undoubtedly the club benefitted over the next few seasons for having an even tighter-knit playing group.

It certainly ranks right up there with the best trips I’ve ever been part of and I know the feeling was mutual within the touring party. Indeed, an ex-club president who shall remain nameless, leaned into me a number of years later in the club bar, pint glass in hand with one hand on my shoulder and said, “Don’t’ ever tell my wife, but that trip was better than my honeymoon!”.